In our Choros studies we deal with the choreographic nature of the chorus, with its origins and principles beyond the speaking and singing choir in the theatre or concert. We are interested in a chorus that creates its stage through its performance and that does not separate dancing, singing and speaking from each other. The ancient Greek title “choros” thinks choir, round dance and dance place – i.e. body, movement and space – together. Choros I + II are studies with regular rehearsals lasting several months with eight or six performers, sometimes open to the public.

In Choros everyone moves, performers as well as visitors. The room is large and empty, there is no artificial light, the performance takes place at dusk, begins in daylight and ends in the dark. The performers walk in circles, they are at the same time related to each other and to the audience. Related means that everyone of the space chorus is with him- or herself and all the others in walking rhythm, in glances and in the perception of space and body as a whole. The chorus has no conductor, but the way of walking, the division of the space and finally also the way of speaking and singing emerges again and again anew from the being with each other of the participants. It is about being with oneself and with the others in a continuous multidimensional way – walking, looking, hearing, feeling, speaking, singing. The chorus trains this kind of multidimensional relationship in walking, speaking, looking, hearing and feeling intensively over a long period of time. We work on the localisation in space, the grounding on the floor, the connection to each other, the mutual looking at each other and being looked at, the opening and relating to several others at the same time, the rhythm that arises again and again from walking and talking together.

When the visitors enter the room, the chorus has already begun, i.e. one enters an otherwise empty room in which six people are walking in circles. They walk regularly, their movements are steady, there are no abrupt changes in direction or speed, it is flowing. As a spectator you can move as you like. You can stand, walk around, come closer or keep your distance. But you are never outside: the space chorus realtes to the spectators, i.e. depending on where the spectators are and where they move, the space in which the chorus moves shifts, stretches or contracts. The performers move in relation to the visitors, towards them, around them and not only look at each other, but also have eye contact with the audience. The movements as well as the looks are unintentional, it is a contact in the moment of passing by, nothing is expected. The performers let themselves be looked at, the openness of the gaze does not want anything specific, it is open to the gaze of the other.

In Choros everyone is potentially moving, yet they do not merge, performers and spectators are not the same and don’t have to do the same thing. The tasks of the performers are not those of the audience, the performers prepare a space for the visitors, they create it through their manifold relations, through their movements they give space to themselves and the others, they give space to each other and the visiting participants. This spacing or giving space is the actual action in Choros. The invitation to the audience is to perceive spatial relations with their own bodies, to explore distances and approaches. The plural is important here because in a certain way the reception in Choros can be compared with the classical contemplation of a sculpture, but with the decisive difference of plurality and movement. Nevertheless, the comparison makes sense: the classical view of a sculpture consists of a visitor moving around the sculpture standing freely in space. In contrast to the more static view of the image, the aesthetic encounter with a sculpture is moving, spatial and places one’s own body in relation to it. One comes closer, walks around, goes further away, feels the tension of distance and closeness, experiences the space in between. With Choros it is similar, only that it is not about an encounter between two, but about manifold relations to the performers as well as to the other spectators, who are also all in motion. Why the comparison with the encounter with a sculpture is fruitful despite its differences is that it is about a spatial-corporeal relationship: one walks around, steps back, gets closer to experience exactly these distances, their tensions and intensities. The sculpture opens this space, allows the space between me and oneself to emerge, and in doing so it does not act or tell anything. This aspect – that it is about the emergence of spatiality – connects the contemplation of sculpture with the experience to which Choros invites.

Even if the initial setting is quite different from that in Fortress / Europa, where here everyone is potentially moving in space, while in Fortress / Europa the audience sits exposed and the space around them moves, the invitation to participate is similar: Possible participation does not take place as interaction with the performers, as the consequences of a plot, understanding a concept or evaluating a form; it is more basic and primarily physical perception and experience of a spatial rhythm that moves between all participants. 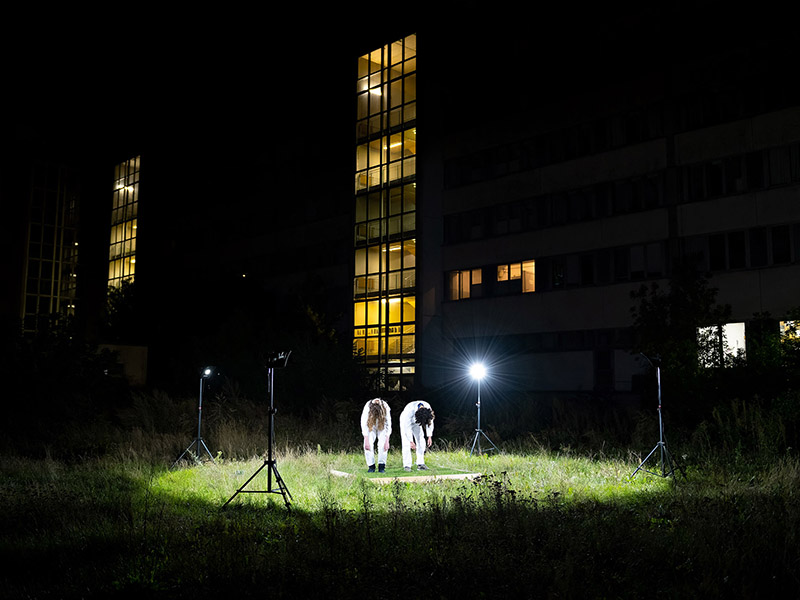